A checkweigher does exactly what its name would imply, it checks the weight of items as they pass through that point in the production process. This is a relatively simple concept, however there can be considerable difference between checkweighers depending upon their application.

If you’ve ever used a self-serve checkout line, you’ve probably been exposed to a manual checkweigher. As you fill bags with items that you scan, the overall bag is weighed and if the weight doesn’t adjust to what the system expects based upon the last scan, a helpful assistant will probably drop over to help you out and correct any mistakes. This application for a checkweigher is for theft protection and inventory control.

In modern, high capacity production lines, a manual system like you’ve experienced isn’t practical. The challenge then becomes, how can you weigh hundreds of items per minute as they are passing along a high-volume production line?

For automated checkweighing, a requirement is often that the production line can’t stop, so these systems use a special conveyor belt called a ‘weigh belt’ that is mounted on a weight transducer of some type. The transducer can be a typical automation force measurement instrument like a strain-gage or load cell depending upon the design. For very high speed / high precision applications there are advanced load sensing devices as well.

Checkweigher systems get their alternative names from the fact that they are belt-based or that they are measuring things in motion. So common names are ‘belt weighers’, ‘in-motion scales’, ‘dynamic scales’, ‘in-line scales’ and ‘conveyor scales’. The checkweigher setup may have its own ‘infeed belt’ that corrects the speed of the item to be weighed the speed that the scale can accept and may position the product orientation or space to adjacent items to ensure an accurate result. Also part of the checkweigher system may be a ‘trigger’ that uses an optical or ultrasonic sensor to determine the precise location of the item to be weighed. Getting the item to be weighed at the right spot on the belt when the reading is taken can increase accuracy.

Example of the Checkweigher Weighing Belt

As you can imagine, this means that dirt, debris or moisture can affect the optical sensor as can a buildup of any of these on the floating system itself. Stray air currents, particularly up and downdrafts can also affect accuracy as a can a range of other factors including ambient temperature and magnetic fields from other equipment or equipment power lines.

There’s often a method of dealing with reject items that are out of tolerance, sometimes a ‘reject belt’ re-directs these items or there may be a drop gate to drop products or an actuator that pushes rejects to the side.

Example of a Checkweigher with Integrated Sorting Device

There are various regulations depending upon where the products will be sold regarding the accuracy of the weight that’s provided on consumer facing labels and varying penalties for non-compliance. Additionally, distributors and retailers may have their own standards and penalties as most large companies understand that a scandal caused by mis-labeling can carry considerable costs. To make things even more complicated, these rules may include standards or language pertaining to ‘average’ or ‘lots’ such that a mix of over and under-filled packages may actually meet a given standard.

In the US, standards related to product labeling are defined by the Department of Commerce National Institute of Standards and Technology (NIST) Handbook 133 which defines the specific net content laws for pre-packaged goods. This standard goes into the number of packages that can be underweight not exceeding the MAV or Maximum Allowable Variation for any instance. Every advanced industrialized country has a similar set of standards governing package weight and the associated product labeling. Having real time analytics on your checkweighers enables you to have peace of mind that you are operating in compliance.

With all of these governing standards, setting up and managing a checkweigher can sometimes take a bit of sophistication.

Some manufacturers monitor weights in ‘bands’ of acceptability that might include:

The ‘Ok’ bands enable a response by workers to a system possibly drifting out of tolerance. In very sophisticated systems this data is used in an automated feedback loop directly to filling machines to adjust on the fly. For other operations, having real-time access to these bands can make the difference in keeping a line operating and having to stop a line that’s now producing too many rejects.

In ALL cases, having a real-time running record of checkweigher analytics can help to keep wastage at a minimum but also demonstrate a commitment to label accuracy should a problem develop.

There are two key factors used to judge a checkweigher for an application, Linearity and Repeatability.

Linearity defines how close a measured result is to the actual weight of the item being weighed. The lower the error measured by running sequential test weighings the better the linearity.

You should check with an applications engineer or systems provider to ensure that the machine you select will deliver the right Linearity and Repeatability in your operating environment and on your application for the desired length of operation.

Checkweighers have the obvious application of ensuring that a package contains the right weight of a product. People are creative however! Checkweighers are also used for other purposes such as to count products - the number of screws in a bag for product assembly for instance. They’re also used to make sure that a mixed box of components has the right mix of components in it or the right paperwork. Checkweighers can also be used to classify products to be sorted into like groups and to make sure that an operation has been performed to standard - for instance was enough weld overlay deposited on a crankshaft prior to entering a machining center. 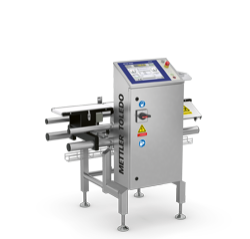 Checkweighers however, are really the ultimate production waste management machine. You can gain incredible insights into ways to reduce production waste by using real time checkweigher analytics. Now with Worximity enabling API connectivity to the most popular brands and models of checkweigher, it’s possible to get these deep analytics far easier and faster than before!

To see how one manufacturer increased yield using smart factory analytics, get the case study below!