For most food processors, final packaging is one of the most important and, in many cases, one of the most problem-prone areas of the entire production process. The difficulties that arise during packaging are often due to the complexities of automating the multiple instances of transferring, handing off, filling, bagging, sealing, and packing required to convert the product into a sellable unit.

Composition of a Typical Packaging Line

Most bagging and packaging operations include many of the following broad process steps:

There are, of course, many other both standard and specially designed processes that could be included in the above list. Because of the variety and complexity of equipment, however, final packaging is often a processor’s greatest challenge. Nevertheless, Worximity’s Smart Factory Analytics system allows manufacturers to connect all these processes, consolidate performance data, and display a comprehensive picture of real-time package line performance. Results displayed on TileBoards allow employees to monitor activity and react to changes as they occur.

Importance of OEE Manufacturing and Throughput

Throughput, described by Matt Nichol as "the average number of units being produced on a machine, line, unit, or plant over a specified period of time," is one of the most important metrics for gauging the effectiveness of packaging operations. Ensuring factory output can satisfy customer demands and expectations is critical to overall company performance and profitability. Throughput, therefore, is the primary measure of a company’s ability to meet customer demand.

For a company to achieve its required throughput targets, packaging lines must run effectively—and to track effectiveness, companies measure packaging line OEE. Problems across packaging processes, however, can lower OEE manufacturing values and threaten throughput and the delivery of finished products.

Common Packaging Line Problems and Tips to Correct Them

It is critically important that all packaging materials are able to run on the plant’s packaging equipment. Although it may be attractive, a glass bottle with an odd shape may be tough to move through high-speed conveyors, transfer mechanisms, fillers, and packers. To ensure the most effective design is used, package designers should work closely with plant process engineers, line personnel, and equipment suppliers.

Many types of films are used in packaging, including shrink wrap, overwrap, printed films, multilayer films, bags, envelopes, pouches, and others. Selecting films with characteristics that are compatible with film-handling equipment is critical. Film thicknesses are becoming thinner, and some equipment may have difficulty spooling, cutting, and sealing these films.

3. Running Out of Consumables

Maintaining adequate supplies of consumables—film, tape, glue, labels, and other supply-type items—is essential for keeping the line moving. OEE manufacturing values depend on availability, which is the amount of planned run time compared to actual run time. If running out of consumable items causes the line to stop, this reduces the actual run time and lowers the OEE score.

Work closely with suppliers to ensure an adequate quantity of consumables is on hand and staged to move to the line when needed.

Careful planning is needed to ensure that the coordination of the numerous packaging line components is properly synchronized. Multiple operations, such as filling, measuring, sealing, packing, and palletizing, must seamlessly work together to transfer and move products through the packaging process. Minor line imbalances, differences in speeds and feeds, and off-speed transfers can cause jam-ups or leave operations without incoming material to process. Thorough training of line personnel, set-up technicians, and maintenance crews can help ensure timing, feeds, speeds, and equipment interfaces are correctly coordinated.

When labeling and bagging lines are down, sellable products are not being produced.  If redundant equipment is available, it can be marshaled into service during extended downtime periods to keep production running. Often, the costs of extra equipment can be justified when compared to the costs of lost production.

How Worximity Can Help Improve Packaging and OEE Manufacturing

Whenever the bagging and labeling process is stopped, both throughput volumes and OEE scores are reduced. By analyzing OEE values in real time, manufacturers can quickly identify problem areas and take corrective actions.  Worximity Technology's Smart Factory analytics software is designed to provide real-time OEE tracking. Our TileConnect smart sensors are fastened to equipment and gather performance data as it happens. This data is sent to the cloud, where our Smart Factory analytics software calculates OEE and other KPIs. TileBoard’s dashboards display the factory’s throughput results.

To see firsthand what Worximity’s Smart Factory analytics can do to improve your bagging and labeling process, request a demo and talk with one of our technical consultants. 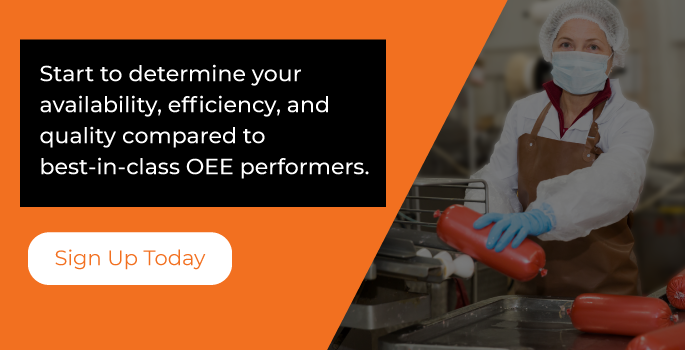