Industry 4.0 and Efficiency - A Global Perspective

By many accounts, the term ‘Industry 4.0’ was coined in 2011 (originally “Industrie 4.0”) by Henning Kagermann, head of the German National Academy of Science and Engineering.

By 2014, Germany was actively assessing the potential impacts of Industry 4.0 and determined at the time that “Only 6 % of those surveyed believed their company was fully ready for Industry 4.0, whereas 55 % of respondents stated work to prepare for Industry 4.0 was not yet under way.”

Fast forward to 2016, only two years later, and PwC’s 2016 Global Industry 4.0 Survey, touted as “the biggest worldwide survey of its kind, with over 2,000 participants from nine major industrial sectors and 26 countries.” concluded that “Industry 4.0 investments are already significant and our research suggests that global industrial products companies will invest US$907 billion per year through to 2020.”

In January of this year (2019), Deloitte produced a somewhat similar survey to the PwC report, (in the Deloitte Review, Issue 24, you can download here) and found that among the manufacturing organizations surveyed, “94% of respondents agreed that digital transformation is a top strategic priority for their organization”. They also noted that a brand new key role is being adopted by many larger manufacturers, the CSCO or Chief Supply Chain Officer, whose mandate is to accelerate the adoption of Industry 4.0 technologies.

Manufacturers are implementing the CSCO role because Industry 4.0 has both vertical, and horizontal dimensions. Vertical implementations generally mean applying Industry 4.0 technologies within their own organization in order to provide the right actionable analytics to the right role at the right time. Horizontal implementations imply connecting disparate stakeholders and value chain participants across a supply chain so that feedback runs from demand back to supply and vice versa.

Companies are generally focused today on vertical implementations and yielding significant results, while horizontal implementations are still nascent but envisioned to be coming soon. Therefore,  as companies get their internal Industry 4.0 house in order, they’re already assuming that connecting to other stakeholders is inevitable, and hence the ‘Supply Chain’ in the CSCO title. 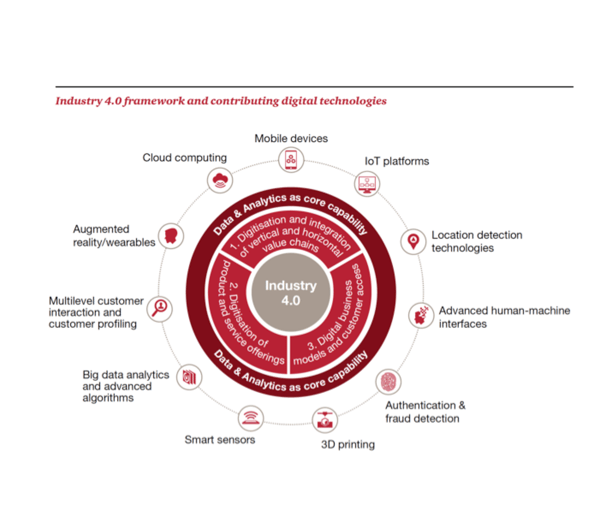 Even though Deloitte’s Industry 4.0 framework (above) includes a wide range of technologies and capabilities,  according to the PwC report reference above, “The major focus of this investment (Industry 4.0), near term will be on digital technologies like sensors or connectivity devices, as well as on software and applications” - (like Worximity!). Further, they note that “More than half of respondents expect their Industry 4.0 investments to yield a return within two years or less, given investment of around 5% of their annual revenue.”

In other words, manufacturers around the world have accelerated from Industry 4.0 to being a largely academic concept, to producing short ROI timeframes, with sensors and software, in less than 10 years.

Where is this ROI coming from? It’s a mixture of things of course. In some cases, it’s being driven by new products and services that are Industry 4.0 enabled, for instance manufacturers who are embedding analytics capabilities into their own products in order to foster new services businesses.

Largely though, the ROI is being driven by higher efficiencies and the resulting cost savings. According to PwC, Industry 4.0 was found to be driving “cost reductions of 3.6% on average” and that “digital technologies enable shorter operational lead times, higher asset utilization and maximum product quality; all told, our survey respondents expect to save US$421 billion in costs each year for the next five years.”

Clearly, there’s something going on here!

In fact, there is. BDO has concluded that “Industry 4.0 presents a generational opportunity: to operate more efficiently, to manage risk more proactively...decisions are made faster...supply chains (are) tighter, resources go further than ever. No, it’s not hype. No, it’s not consulting’s latest catch-phrase. Industry 4.0 represents a quantum leap forward in operational efficiency and value creation. It is the next industrial revolution.”

BDO goes on to say in their article, From Continuous Collaboration, Countless Efficiencies, “Industry 4.0 brings numerous time-saving, cost-cutting, resource-maximizing benefits to supply chains across industries. Even incremental improvements have measurable results. Disruptive events can be modeled across a range of scenarios. So when dealing with the inevitable surprises of real-world supply chains, the response is no longer to just “wing it.” Adapting happens both more quickly and more effectively.”

Leading academics, manufacturing industry leaders and the smartest strategic consultants have all converged on one conclusion, that Industry 4.0 is real, that ROI is significant, and that this ROI is driven largely by manufacturing efficiency gains.

Do you want to start achieving your own Industry 4.0 efficiency gains? Download our guide here!